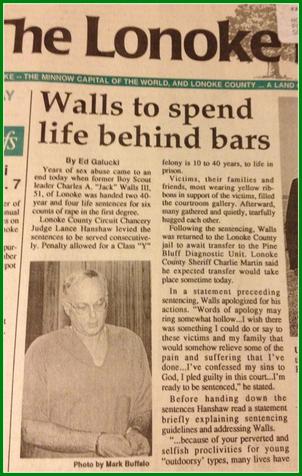 After the first trial, Walls’ abuse of the boys continued uninterrupted until July 26, 1997.  The parents of Walls’ Boy Scout Troop, and friends that testified on his behalf at the first trial were convinced “the Hogans were only after the Walls’ money.”  Between the first trial and the Stocks’ murders on January 17, 1997, Jack Walls traveled to the Boy Scout camp in New Mexico, under the name of Joe Stocks, with Barbara Stocks, Heather, Heath, and other Scouts.

Breaking a 30-year code of silence, one of the boys, 16 at the time, told his parents about the years of abuse he had suffered at the hands of Walls.  He had seen Walls give his brother a pair of camouflage pants.  “I knew he was going to be next and I wasn’t going to let that happen.  I used to get stuff like that all the time and they thought it was cool,” the boy said.  The next day, another boy, also 16, who Walls had been abusing since the age of 7, put a gun to Walls’ head as Walls was washing his car and forced him to a neighbor’s home, where the parents of both boys were discussing “what to do about Jack.”  He made Walls tell the parents what he had done to them.  “You go in there and you tell my mama and my daddy what you’ve been doing to me all these years,” the boy said.  “A few seconds later Jack admitted it was all true,” said one of the parents.

While struggling to understand the magnitude of the situation they found themselves in, the families first considered allowing Walls to sign himself into a psychiatric clinic for help.  “We didn’t want to hurt his wife and children.  Lonoke is a small town where everyone knows everyone,” one parent stated.  The parents quickly changed their minds as the details began spilling from the boys and became more and more horrifying.  The parents called the DHS Child Abuse Hotline and, unlike 1992, a full-scale investigation was launched.  In interview after interview, the boys of Lonoke came forward and exposed Walls’ secret world of alcohol, pornography, explosives, handguns, threats, lies and sex.  The mention of Heath’s name was repetitive though Heath remained silent.  The second trial of Jack Walls spoke, instead.

On October 6, 1997, Larry Cook, Lonoke County Prosecuting Attorney, filed two rape charges on behalf of the boys.  Evidence included well-known copies of pornographic books; “The Scoutmasters Wife, Boy Scout Mother, Female Animal, and Confessions of Slippery Jack,” as well as a copy of the state criminal code for sexual offenses, a stolen gun, and a semen-stained attic.  Still, Larry Cook, was not cooperating with the Chief of Police in the investigation, prompting the Chief to write a letter to the Circuit Judge, complaining that Cook was resisting filing additional charges.  Cook then removed himself from the case, citing his on-going professional relationship with Judge Walls.  Betty Dickey was appointed Special Prosecuting Attorney, replacing Cook.

Ms. Dickey amended the charges against Walls on November 5 and 14, 1997, to include six rape charges, two counts of violation of a minor in the first degree, and two counts of solicitation to commit murder.  The murder charges were a result of interviews with the boys in which they said Walls had instructed them to kill Cledis and Doug Hogan.  The low number of rape charges against Walls was due only to the statute of limitations.

Walls’ bond was set at 1 million dollars, which he was unable to post.  On January 6, 1998, Walls pleaded guilty to five counts of rape and no contest to one count of raping Heath Stocks, in order to avoid more serious charges being leveled against him in regard to the death of the Stocks family.  The other charges were dropped in the negotiated plea.

Walls was sentenced to four life terms, plus two forty-year terms, to be served concurrently.  In his sentencing statement, Judge Lance Hanshaw stated:  “I do not have to believe Heath Stocks’ testimony to know that he was your finest creation and perhaps most vulnerable victim and to know he became what you taught him to be.  I only know that, in the very least, you are indirectly responsible for the deaths of Joe, Barbara and Heather Stocks.”  On appeal, the Supreme Court ruled this comment biased.  Ultimately Walls’ sentence was reduced to three life terms, plus three forty-year terms, to be served concurrently.