On December 29, 1992, late in the evening, Jack Walls said to one of his 13 year old Boy Scouts, “Let’s take a walk”, nodding toward the woods.  Walls had already given the boy pornographic reading material and both were drunk.  “I dreaded it, I knew what was going to happen.  He took me down to an old broken-down to an old broken-down school bus parked on the farm.  He raped me when we got there,” the boy said.

Dec. 30, 1992:    Cledis contacted Walls and demanded his immediate resignation from Scouting.  Mrs. McConnell reported the incident to the Department of Human Services (DHS) Child Abust Hotline and to the Lonoke County Sheriff’s Office.

Dec. 31, 1992:    Walls wrote a letter of apology to the Hogans.  “…there is a great amount of trust placed in a man who works with young people as I did, and I violated it.  I am ashamed of this as I have let everyone down from the Scouts through my own family and now it’s up to me to change my life.”

Jan. 4, 1993:        Cledis Hogan reports the incident to Jeffrie A. Herrmann, an executive with the Boy Scouts Quapaw Area council.

Jan. 5, 1993:        Herrmann notified Walls by letter that the organization was “revoking and severing their relationship” with him.  Within a two-week period the Boy Scouts notified DHS on three separate occasions.  Law (Act 1208 of 1991) required a complete investigation within 30 days.  The investigator, Ken Murphy, took no action until May 26, 1994, six complaints and 147 days later.

Without determination, the investigation was turned over to Larry Cook, Prosecuting Attorney of Lonoke County.

July 28, 1993:      Rainbolt interviewed Walls who claimed he ”only hit Hogan on the belt buckle with the back of his hand.”

Oct. 8, 1993:       Rainbolt closed his investigation and stated that Larry Cook “determined that the actions of the suspect in this case do not constitute a crime.”

Nov. 18, 1993:    Cledis Hogan persuades Municipal Judge Gary Rogers of Carlisle to sign two warrants against Walls on charges of contributing to the delinquency of a minor and third degree assault, both misdemeanors.

Nov. 23, 1993:    After discussing the matter with Rainbolt, Murphy determined that no abuse took place, nor intended, and closed his file on the case.

Nov. 30, 1993:    A copy of this confidential DHS file was released to a person listed only as “Walls.”  This file has never been accounted for.

On April 8, 1994: during a three-hour trial, character witnesses including former State Representative Bill I. Fletcher, other pillars of the community, and boy after boy testified on behalf of Walls.  Later, it was revealed Walls was sexually assaulting these boys, one of whom said, “I was told if I didn’t testify for him, I would end up dead.”

Walls was found innocent of the charges, however, Judge Rogers was not satisfied and said, “I personally believe that there may be other charges that may have been filed, but weren’t.  I’m not making any determination on whether there were any sexual advances or not.  That, again, was not before the court.”

In a 1999 interview Cledis Hogan said, “You’ll never convince me that it wasn’t the Walls’ power and money that kept Jack out of trouble.”

Ken Murphy was fired in June of 1999, one day after a reporter showed DHS officials documents, which the officials admitted they had never read, that showed Murphy had not only failed to do his job, but had broken the law in the Hogan investigation. 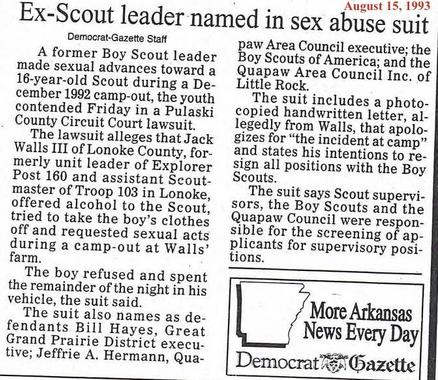 The three boys went to Doug’s truck to leave but Walls stopped them by taking the keys from the ignition.  Early the next morning Walls allowed the boys to leave.  Their parents questioned their early return home and it was then that Doug began to tell his father, Cledis Hogan, what had happened the night before.  Following are the subsequent events:

As on many other nights, one encounter wasn’t enough for Walls.  Doug Hogan, then 16, a Boy Scout from Carlisle, was on the outing with Walls’ troop.  Later that night Walls approached Doug, offered him alcohol, and the topic of conversation quickly turned to sex.  Walls then lay down next to him by the fire, with his head at Doug’s feet.  “Jack started unbuckling my belt.  I didn’t know what to do. I told him to stop,” Said Doug.  But Walls was persistent.  Doug told him no again, then got up and woke Marc McConnell and Chris Houchens, friends who were asleep in their tents.